Explore the beautiful coastline south of Rome, combining quaint fisher hamlets, ancient ruins and the stunning backdrop offered by the dramatic cliffs and the turquoise waters of the Mediterranean Sea. 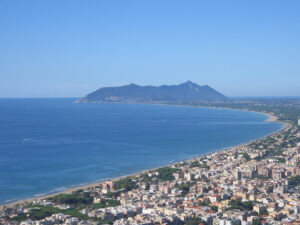 View of Terracina and Mount Circeo from the Temple of Jupiter

This day trip is best done by car. Starting around 8 in the morning, the drive to Terracina takes less than 2 hours. This beautiful seaside resort is located on the Riviera of Ulysses, so called because legend has it that Ulysses sailed through on his travels.

A winding panoramic road will take us to the ruins of the Temple of Jupiter, perched high above the Gulf of Gaeta. Enjoy the spectacular views, taking in the coastline, the Pontine Islands dotting the sea, and the jagged profile of Mount Circeo, where the sorceress Circe is said to have lived, plotting to turn Greek sailors into beasts.

Ruins at the Temple of Jupiter in Terracina

In Terracina’s centro storico let’s walk along the narrow cobblestone streets to the main square, where we’ll easily spot the traces of the ancient Roman city, such as the original paving stones dating back to the 1. century, a stretch of the Appian Way complete with city gate, and the remains of the Capitolium, once the most important temple in town. The piazza houses cafés, the Fascist-era town hall and the beautiful medieval Cathedral of San Cesareo, built on the ruins of a Roman temple between the 5th and 6th centuries. The Cathedral is graced by a beautiful romanesque belltower and inside you can see the colorful inlaid marble floor, set out in a beautiful geometrical pattern, and the intricately carved pulpit. 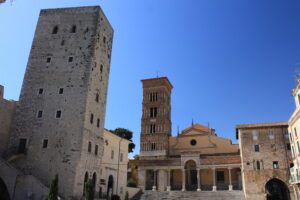 A highlight of our excursion is the scenic drive alongside the Via Flacca, heading to Sperlonga, a peaceful fishermen’s village where limestone archways frame vistas of the piercing blue sea below. The alleys are lined with white houses, blue doors reminding of Greece, the purple splash of the bouganvillae, and the occasional fresco-painting decorating the walls of the clustered houses.This charming village was ‘discovered’ in the 1950s by the Italian ﬁlm set, who would drop in for a relaxing break from shoots at Rome’s Cinecittà studios.

The was already popular with the Roman emperors and aristocrats, and houses the extraordinary remains of an ancient villa once owned by the emperor Tiberius. Only rediscovered in 1957 during roadworks, the sprawling complex reached all the way from the rocky hills to the seaside. Tradition has it that the emperor used to enjoy sumptuos banquets in a vast limestone cave by the sea.

A wealth of stunning statues, valuable mosaics from ancient ﬂoors, pottery and marble wall panels from the villa’s extensive rooms are on show in the small but exquisite museum.

A short drive will take us to Gaeta, a charming port set onto a peninsula. Again, its history as a resort town dates back to the Roman Imperial period.

In summertime, Gaeta’s beaches are flocked by locals and visitors who gather to soak up the sun and watch the surfing events. The town is a fishing hub and an oil port, and it is also home to a NATO base, being the home port for the flagship of the United States’ Sixth Fleet.

The city is dominated by an imposing castle dating back to the time the French and Spanish royal houses took turns in conquering and ruling over this territory. The other major landmark is the belltower of the cathedral, whose brightly colored ceramic roof will make you feel like you are standing in Amalfi. 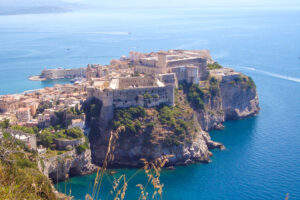 The town has a distinctive Southern-Italian feeling, with a dialect resembling the Neapolitan patois. A stroll alongside the quai will take us to a bakery where you’ll be able to sample some tiella, a pie shaped dish made of thin layers of dough crimped around the edges to enclose a seafood or vegetable filling: traditionally it is made with seafood (squid, anchovies or catch of the day) or zucchini, escarole and spinach.

By now, you are probably ready to settle in Gaeta for an extended holiday, but it’s now time to head back to Rome alongside the Highway n. 1, getting back home on time for dinner!