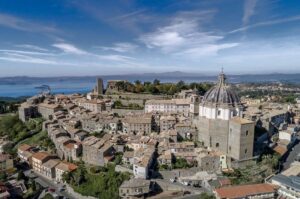 Montefiascone with a view of Lake Bolsena

This day trip will take you back in time to medieval Italy. A 90 minutes drive takes us to Montefiascone, one of the most enjoyable hill towns in central Italy. Even from a distance, you can see it sitting high on the rim of an ancient volcano, the outline of its cathedral’s dome being a very distintive landmark.

At the edge of town, let’s stop to see the interesting romanesque church of San Flaviano, laid out on two levels (a bit like San Clemente in Rome!). The lower church boasts some really fine frescoes, medieval carvings, as well as the tomb of Johann Fugger, a pilgrim who died in town. Tradition has it that his valet would let him know where to find excellent wine by writing Est! on the recommended establishments. In Montefiascone the wine was so good that he wrote Est! Est!! Est!!! on the city gates.

It is said that Fugger died in Montefiascone because he refused to ever leave the town again once he had sampled the white wine this regions is famous for.

Montefiascone overlooks Lake Bolsena, the largest among the volcanic lakes that dot the landscape around Rome. The lake is set amidst an idyllic landscape of rolling hills and verdant vineyards, and has a couple of small, privately owned islands. On a 1-hour long cruise on the lake, it is possible to see the islands from close and hear about the many legends connected to this region. 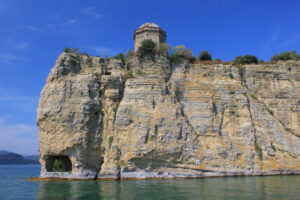 The pretty town of Bolsena, clustered around an imposing medieval castle, is set right on the shore of the lake, and is famous for its cathedral, which witnessed a miracle in the 13th century, when a priest doubting the presence of the body of Christ in the Eucharist saw some blood spilling from the consacrated host. The miracle is commemorated in June by the religious festivity known as Corpus Christi. 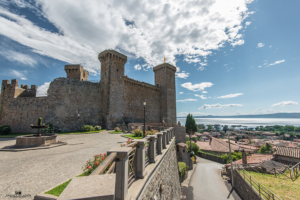 After lunch at a nice restaurant right on the shore, it’s time to move to our next destination, the stunning village of Civita di Bagnoregio. The landscape changes from vineyards to fantastic rock formations called “calanchi”, deep furrows dug by erosion on the clayey ground. 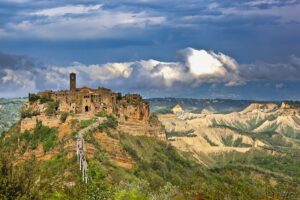 With its crumbling ruins perched atop a precipitous mountaintop and reachable only by a footbridge that climbs up the cliff side, Civita di Bagnoregio is surely one of Italy’s most dramatically situated towns. Originally built by the Etruscans more than 2,500 years ago, Civita di Bagnoregio boasts a fascinating history and, thanks to its remote location, a wealth of well-preserved medieval buildings.

With erosion causing most inhabitants to move, the cobbled streets and stone-brick houses of Civita di Bagnoregio are now near deserted, leaving it as a hauntingly beautiful reminder of times past. The uniquely situated town still springs to life in summer as part-time residents return to welcome tourists and visitors who come to enjoy the jaw-dropping views and wander around the town. It is so beautifully special that many artists and writers have chosen Civita as their summer retreat, and the town boasts some interesting festivals in summertime. Immerse yourself in the magic atmosphere of this fairytale little town, before heading back to Rome. 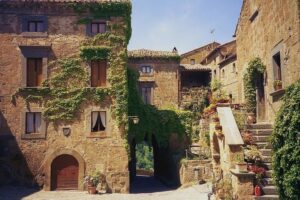