The Garden of Ninfa, built on the ruins of the medieval town of Ninfa in the Pontine Marshes, has been classified by the New York Times as one of the most beautiful and romantic gardens in the world. Located just about 90 minutes from Rome, it is set at the foot of the Lepini Mountains.

In the Middle Ages Ninfa was a thriving village, part of the Caetani family’s vast landholdings around Sermoneta. It was abandoned when malaria-carrying mosquitoes infested the plain, and it fell into ruin. Now it is a place of rare beauty, a dream garden of romantic ruins and rushing waters, of exotic species and fragrant blooms. Ninfa is an oasis of the World Wildlife Fund, managed in collaboration with the Caetani heirs. Preceding generations of the Caetani family, including English and American spouses and gardening buffs, created the garden over the course of the 20th century. 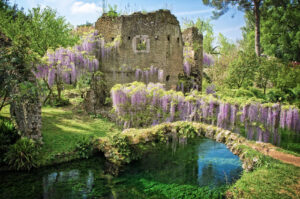 An expert botanist will take us around the garden, introducing us to some of the 1,300 plant species that grow among the remnants of the medieval village. See waterfalls and bridges as you walk around; plus, bamboo, cherry trees, irises, lavender and more varieties of roses that you can think of.

After our tour of the garden, we’ll head to the small medieval village of Cori and enjoy a delicious lunch at a local restaurant. 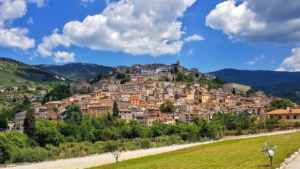 Even though the narrow porticoed streets, the city layout, the houses and churches have a distintive medieval feeling to them, the origins of the town go way back: the foundation dates back to the 6th century B.C.,  as witnessed by the strong polygonal walls upholding the terraces that form its urban structure. In Roman days, many monuments enrichened the city: the Temple of Hercules was erected on the acropolis, the highest point of the hill. From up here, you can enjoy a wonderful view of the Pontine plain, with the mountains in the back and all the way to the sea. The temple has been admired since the Renaissance age by famous artists and architects (Raphael, Antonio da Sangallo, Piranesi), and is really evocative as it stands like a sentinel guarding the plain below. Watching the sunset from up here is a truly unforgettable experience! 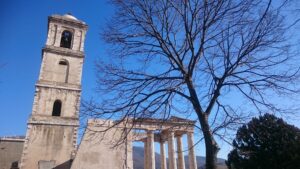 Temple of Hercules in Cori

Later on, most of the pagan temples were replaced by Christian churches, housing some of the most impressive cycles of frescoes to be seen in central Italy: the church of Sant’Oliva, built on the remains of a temple dedicated to some unknown deity, houses an amazing chapel painted in the late 1400’s that reminds closely of the Sistine Chapel, since on the ceiling we can see a representation of the Story of Creation.

The other unexpected treasure chest to be found in Cori is the Oratory of Santissima Annunziata located on the outskirts of the village. A few steps lead us up to an unassuming building which houses frescoes painted in the first half of the 15th century, nicknamed by art historians the “Scrovegni Chapel of the South of Lazio”. Every inch of the church is covered in paintings that have been beautifully preserved, engulfing us in a simphony of vibrant colors and lively religious scenes. 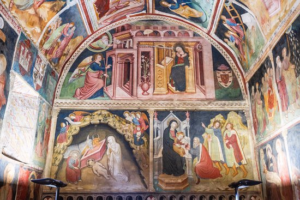 All of this certainly makes for a wonderful day spent contemplating the incredible beauty of Italy; if you wish to add an adrenaline rush, you will be happy to know that just a short distance from Cori, in Rocca Massima, you can try the longest zipline in the world, more than 2 km gliding over the lush landscape of the Lepini Mountains! Ready for some fun? 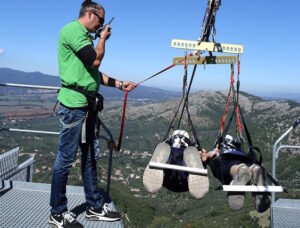 Zipline in Rocca Massima, the longest in the world