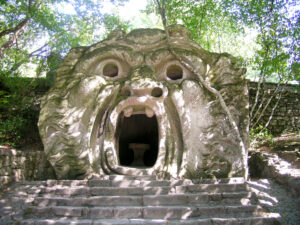 Park of the Monsters in Bomarzo

Today we will explore the Tuscia region located north of Rome, one of the most fascinating areas in central Italy.

A 90 minutes drive will take us to a real gem of this beautiful area: the Sacred Grove, or Park of the Monsters, near the tiny hamlet of Bomarzo. It was commissioned by the local prince, Vicino Orsini, a highly cultivated gentleman and a great patron of the arts. In 1552, from a wild ground with shapeless rocks of peperino stone, he created a magical and enchanting place. The works were undertaken by Pirro Ligorio, the same architect who built Villa d’Este in Tivoli. 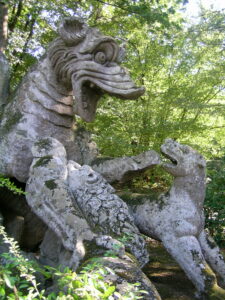 The Dragon in the Park of the Monsters

The history of the Sacred Grove of  Bomarzo starts like a romantic and melancholic tale. Once upon a time, an Italian Renaissance prince, passionately in love with his wife, decided to have a marvelous garden built in her honor after she died. The garden became a unique work of art, halfway between reality and fantasy, which, unlike other Italian Renaissance gardens, does not follow any of the known rules of geometry, typology or symbology: it appears as an enigmatic Mannerist gallery of bizarre, at times monstrous, larger-than-life sculptures and lopsided architecture. No wonder it provided a source of inspiration for surrealist artist Salvador Dalì!

After our relaxing walk around the park, a short drive will take us to Viterbo to enjoy lunch in one of the many delicious family-run restaurants. 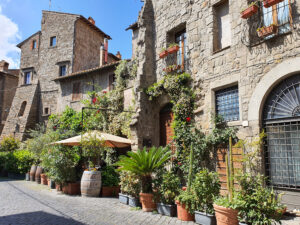 The city of Viterbo has a distinctive medieval feeling

Viterbo is known as “the city of the Popes”, because in the 13th century the popes resided in the city for about two decades, preferring it to Rome and Rome’s riotous squires. The city is also famous for its thermal springs, if you are looking for a day at the spa!

Nearing the city you’ll be amazed by the perfectly preserved medieval walls still running all the way around the it.

The city sprawls onto two hills with a valley in between, and from the valley you have a picture perfect view of the city’s skyline. The most prominent landmarks are the high tower of the town hall, and the striped belltower of the cathedral, which reminds us of Siena and other Tuscan cities. 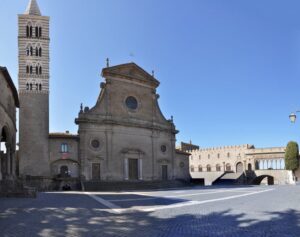 Viterbo’s beautiful cathedral and the Papal Palace next to it

Next to the cathedral, the Papal Palace takes us back to the longest lasting conclave in the history of the Catholic Church: the death of Pope Clement IV in 1268 sparked political infighting among the cardinals, who were not able to reach and agreement for over 2 years. Eventually, the citizens of Viterbo decided to lock them inside the great hall of the papal palace, removing the roof, and leaving them to a sad diet of bread and water to give them good reason to get on with the election! This is where the name conclave (locked in with the keys) comes from. 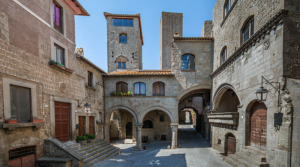 But the most fascinating section of Viterbo is the medieval neighborhood called San Pellegrino, with stone-built houses, external staircases and lancet windows. The high towers built by the various aristocratic families to guard their palaces are still a typical feature of the urban landscape, and in spring and summer most buildings are coated in white, perfumed rincospera, a climbing vine that adds a romantic touch to this charming town. 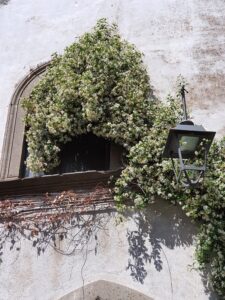 No visit to Viterbo would be complete without a stop by L’antica Latteria, a gelateria praised several times by the Gambero Rosso, and a favorite among locals. The variety of choices will get you in quite a predicament as to which flavors to try: Viterbo’s most typical flavors are Lo schiaffo del Papa, a hazelnut cream with chocolate and crunchy nuts, and Ricotta e Cannella, a delicate cream made from locally produced ricotta cheese.

Fortified by a delicious gelato, we’ll make our way back to Rome.