Rome is many cities in one. Historical periods and different styles pile up in the city centre, with multiple layers of history growing out of each preceding one; while in the suburbs, we can find stunning experiments of architectural concepts that may have been short-lived, but are all the more interesting because of their very uniqueness.

The EUR district, located to the south of the city centre, is one of the most fascinating examples of this “satellite” cities Rome is made of. Going back originally to the Thirties and Forties, it embodies the Rationalist style favored by the Fascist regime. Its grand architecture is clearly inspired by the classical aesthetic of ancient Roman town planning: large, orthogonal boulevards, huge buildings made of travertine and tuff, marble arches and pillars, a somewhat orwellian style that makes you feel like you just stepped into a metaphysical painting by De Chirico.

The district was planned to house the World Fair in 1942, to celebrate the 20th anniversary of the beginning of the Fascist era, and although war intervened and the exhibition never took place, the name stuck – Esposizione Universale di Roma (Roman Universal Exhibition), short, EUR. It soon became the ideal playground for the major architects of that time: Marcello Piacentini was the head of the project, Adalberto Libera, Enrico Del Debbio, Giuseppe Pagano and others contributed to create the neighborhood from scratch.

During WWII the district, still uncomplete, suffered severe damage; however, in the Fifties the Roman authorities decided that Eur should become an out-of-town business district, decades before this concept became popular in other capitals (think of London Docklands and La Défense in Paris). The unfinished buildings were completed, and others added, like the Palazzo dello Sport and the Velodromo, boosted by the 1960 Olympics held in Rome.

Being in Rome, our walk couldn’t start with anything different than a church: perched on the highest point of the area, the basilica of Saints Peter and Paul was started in 1939, but only completed in 1954. It boasts the third largest dome in town, and it’s quite a noticeable landmark when driving into the city from the airport.

But the most representative building of the district is the Palazzo della Civiltà Italiana, known as the “Colosseo Quadrato” (Square Colosseum). This is really a masterpiece of rationalist architecture with its symmetrical rows of 216 arches, arranged on six levels of nine arches each – apparently a hidden reference to the number of letters in Benito Mussolini’s name. The gleaming white marble covers a structure which is mostly limestone and tuff (iron being expensive and hard to get in wartime), and the ground floor is decorated with many imposing statues. For much of its history the building remained unoccupied, until in 2015 it became the global headquarters of the Italian fashion house Fendi, providing another incomparable set for Fendi’s art patronage, being the location of interesting exhibits (another building Alda Fendi took over and restyled completely to use as an art gallery is Palazzo Rhinoceros, located downtown).

The strong connection to ancient Roman prototypes can be clearly seen when standing on Piazzale delle Nazioni Unite, where the twin buildings called Palazzo dell’Ina e dell’Inps remind us of the Markets of Trajan, while the stele dedicated to Guglielmo Marconi, recalls the many obelisks to be seen in Rome. The imposing marble stele took over 20 years for the sculptor Arturo Dazzi, native of Carrara, to finish: 92 panels illustrate the work of the great inventor and scientist Guglielmo Marconi, famed for his invention of the radio and for having established the first radio-communication across the Atlantic.

Walking around the eerie buildings housing the Prehistoric and the Ethnographic Museums, we’ll discover mosaics created by famous Futurist artists as Enrico Prampolini and Fortunato Depero (the one who designed the famous bottle of one of the most popular Italian aperitifs, Campari Soda!). 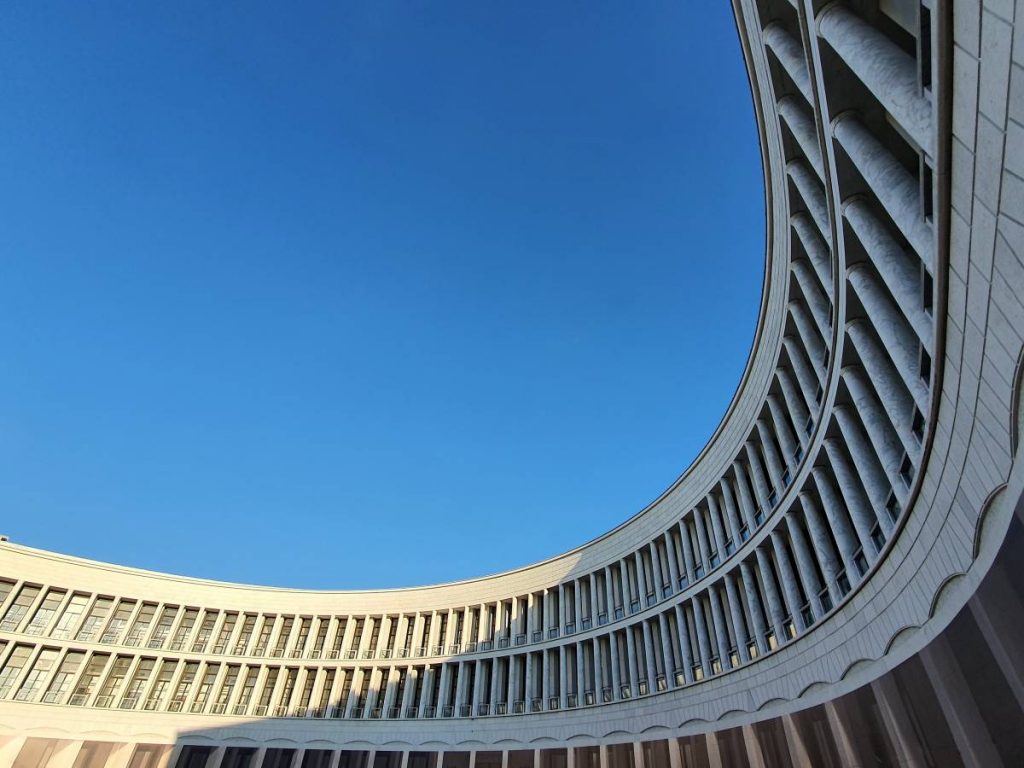 The EUR district is also significant for housing some important museums: it’s a real pity the Museo della Civiltà Romana (“Museum of Roman Civilization”) is closed undefinitely due to some never-ending restoration, because it is one of the best museums to really understand ancient Roman civilization. It has sections dedicated to engineering and constructions techniques, everyday life, games, houses a magnificent model of what the city looked like in the 4th century, as well as casts of the complete frieze to be seen on Trajan’s Column.

Another highlight is the Palazzo dei Congressi, the largest conference complex in Italy, with an enormous Reception Hall, conference rooms, an amphitheater that can seat over 1.000 people, and a banquet room that can accomodate 850 diners. Many rooms are decorated with paintings and mosaics by famous Italian artists: even De Chirico was asked by Mussolini to create a mosaic in the main hall, but chose not to answer the request. Ironically, the neighborhood that seems to come straight out of one of De Chirico’s paintings, has not seen the artist at work.

The dialogue between the rationalist style of the Fascist age and contemporary architecture continues with the striking Convention Centre La Nuvola, designed by Massimiliano Fuksas and inaugurated in 2016. The striking building comprises a transparent glass-and-steel box called La Teca (“The Shrine”), inside which hangs La Nuvola (“The Cloud”), an auditorium seating up to 8000 people.

It’s now time to relax enjoying the peaceful atmosphere of the lake and the park that grace the neighborhood. It is particularly beautiful in springtime, when the many Japanese cherrytrees lining the lakeshore are in full bloom: in April and May you can experience your own Roman Hanami!